That awful sound of a bird hitting
the window

Jacki Cammidge is a participant in the Amazon Services LLC Associates Program, an affiliate advertising program designed to provide a means for sites to earn advertising fees by advertising and linking to amazon.com. Other links on this site may lead to other affiliates that I'm involved with, at no extra cost to you. 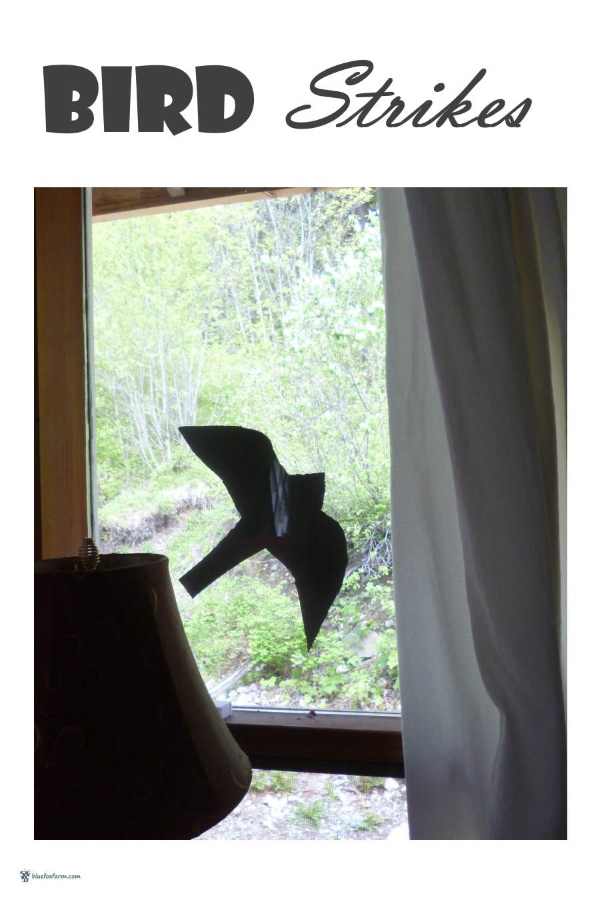 In the spring when birds in the garden are courting, sometimes they're not watching where they're going, or they get too excited.

That's when they hit windows, which to them look like they aren't there.

The reflection of more garden is so dazzling that they fly right into it. 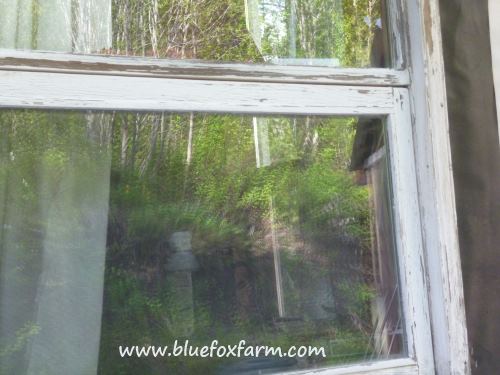 Young birds just learning to fly are at risk too; they hit windows with alarming regularity in the summer. It's sad that migratory songbirds, already at risk from pesticides and habitat loss are also in danger from something so simple as not being able to see a window.

Bird window strikes are the leading cause of death in migration when they hit skyscrapers when they travel at night.

Let's not make it even more tragic by causing their death when they are in nesting mode too.

So, what are the options?  Dirty windows tend not to get hit as much, because the birds can't see much of a reflection.

Or, a sheer curtain on the inside (or outside) could help, although if they're going too fast, this won't get noticed as much. 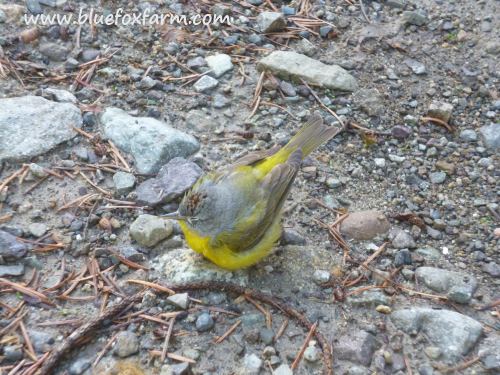 I bet he had a headache.

Seeing how the companions of this Nashville warbler behaved was interesting - a female (possibly his mate) hovered around for a few minutes as if wondering what on earth her husband was up to now, and then a few minutes later, another male dive bombed the victim, attacking him.

What should you do?

If a bird hits your window, what should you do?  Well, first of all, make sure your cats and dogs are in the house and can't make a quick meal out of the poor bird as it tries to recover.

If it's not instantly dead of a broken neck, many birds do recover, given a chance.  Leave them alone, and watch them from a distance.  You might be surprised at what seems to be a catastrophic hit to you is shrugged off in a few minutes.

One day I was at my massage therapists house, waiting for her studio to free up, and some ravens were harassing each other. One flew so hard into the window that I was amazed that it didn't break the window.

He stumbled around on the porch, blinking furiously with the nictating membrane over his eyes.  Then a few minutes later he flew off.  I was sure he would never fly again. Talk about hard headed!

It's best to watch and wait, and prevent a cat or dog from attacking it, and leave nature to it.

My favorite little warblers, the Nashville warbler, and chickadees seem to be the most often found with a concussion.

Sometimes, I look out and spot a chickadee hanging upside down in a tree - motionless.  This is an obvious sign that he's hit the window.

Often, the strike will kill the tiny bird, or at least give it a major concussion.  Then they're at risk of being stalked by a cat or other pet.

Even hummingbirds are not immune to hitting windows, even though they seem to know where they are to beg for the feeder to be refilled. 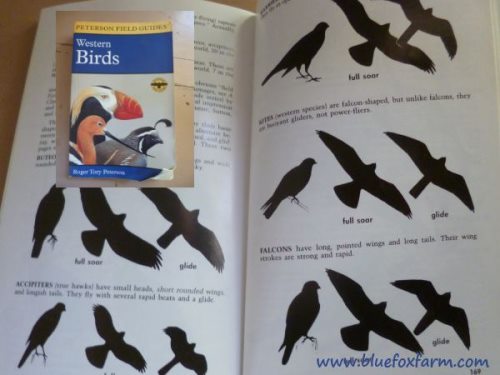 So here's my solution to it; hawk silhouettes cut out of cardboard and painted black.  Then they can be stuck onto the outside of the window to warn the birds away. 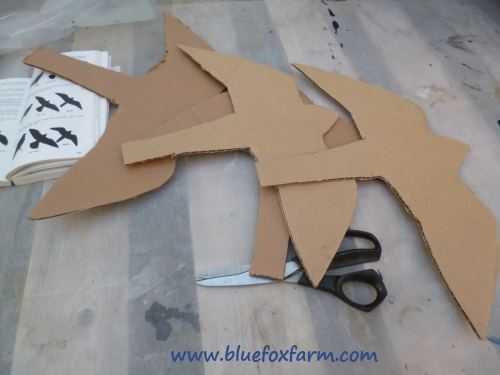 Cutting out the cardboard doesn't need to be perfect - just the rough outline of a hawk or bird of prey in flight is enough to warn the birds off.  In bird language, a hawk means danger.

Black exterior latex paint is a quick drying option on both sides. 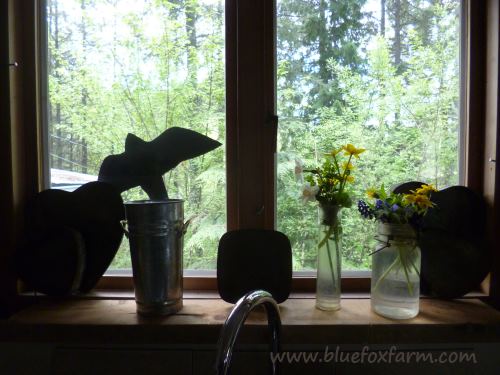 Stick the silhouettes on the outside of the window with double sided tape for the best effect, and window strikes will be a thing of the past.

This isn't the end of the story; I was still getting bird strikes, even with the silhouettes on the outside of the window, so I cut fish netting into strips and stapled it up to give the birds some warning of a barrier.

The one window I didn't put the fish netting on remains an issue, with birds still crashing. 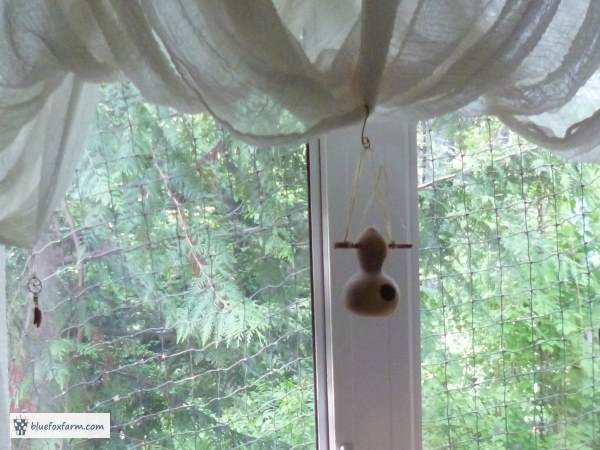 The crash of the hit shook the house, I'm surprised the window is intact.  Looking out, there's a tiny Chipping Sparrow, dancing in excitement, looking much too perky to be the victim.

Looking down on the ground, I was shocked and amazed to see an owl!

These tiny Northern Pygmy Owls are commonly seen and heard in the daytime, so it's not surprising to have them around. 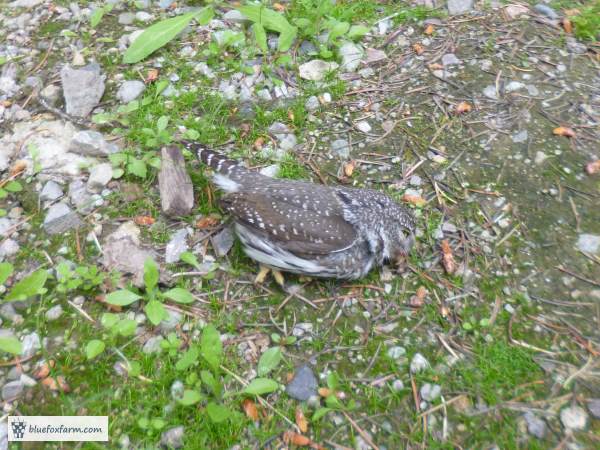 I kept the dog inside, and stood guard against the many other birds creating a ruckus, including two robins and lots of other smaller birds, all sounding the alarm.

few minutes later, the owl lifted its head and looked straight at me with its piercing yellow eyes, then bounced into the air and off like a shot into the woods.

That first instinct is to run over and pick them up, but that's the worst thing you can do - stay vigilant and stand back to keep their stress to a minimum while they recover, and they'll astound you with their toughness.

Time to get the fish netting out again!

Learn what it takes to be creative - we all have the gene but how do we develop it? Get the free guide! Fill in the form below for your copy; (Don't be disappointed - use an email address that will accept the free download - some .aol email addresses won't.  If you don't see your download within a few minutes, try again with another email address - sorry for the bother.)