A twig obelisk built in a large container planted with fast growing annual vines will quickly fill in to create a beautiful focal point or accent for your garden. 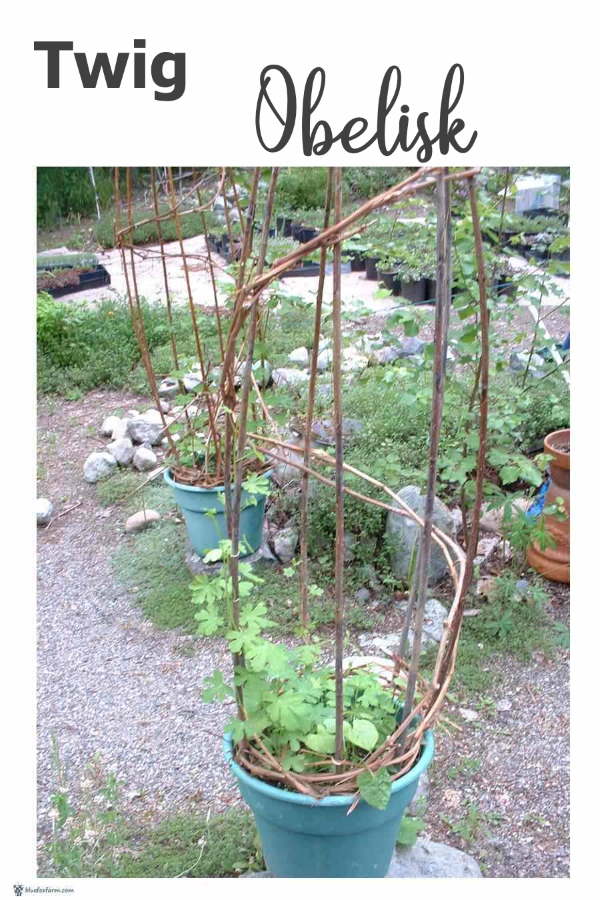 There's nothing like a twiggy obelisk or trellis to really give your garden a rustic and country look.  This tutorial will give you some guidelines and ideas on how to build a great plant support.

Placed on either side of a rustic archway, the vines will grow up the obelisk and over the archway.

Twig obelisks can also be inserted directly into the ground and planted with pole beans for a rustic way to support your crops.

The twig obelisk in the picture has several brightly coloured twig species in a spiral to support vines.

Generally, obelisks have four legs, but sometimes three are enough.  These should be all the same length, and be somewhat taller than the gardener.

Some obelisks are shorter, and stabbed into a big pot for a vine to scramble up, and if shorter twigs are all you have, that's how high it should be.

I'm a big fan of willow for garden accessories, but other kinds of twigs work well too.

Willow may not be the longest lasting of the twigs you may have to choose from, most often they're the straightest and the ones that you can usually get a good number of long branchless rods.

I've also used Acer douglasii, or clump maple.  These grow in colonies, and in fighting to reach the light, they grow tall and straight.

Make sure they're all the same length by laying them on the ground (as flat as possible) and comparing them.  I usually try to get the bottom part of the trellis or obelisk a similar diameter, just for aesthetics.

Drill one hole through each one near the top, about half an inch to an inch down from the top.

Thread a piece of wire through all of the rods.

Twist the ends of the wire to form it into a rough circle, arrange the rods to fit, and twist it tight.  Leave a little bit of slack for the next step.

Cut some shorter pieces of twig, and wire those in place to form spreaders.  Two sets of these will be enough, or more if your obelisk will be taller.

Then stab the 'feet' into the soil around a vine or twining plant.

If you're using willow and it's freshly cut, it will root and grow, no doubt about it.  To prevent this, peel the bark off the lower few inches, or up to a foot off the ground.

A slightly different design is outlined below.

How to Make a Twig Obelisk 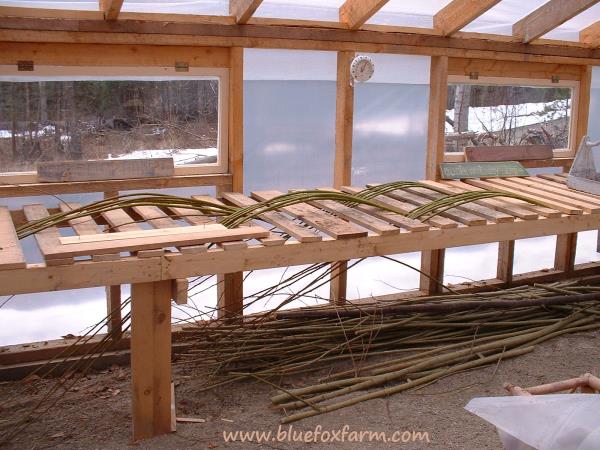 You’ll need an odd number of long straight willow or other canes, about 2 meters (6') long. An odd number such as 7 or 9 will give you the right number to weave the grapevines or other twigs around to match up at the end.

Gather your large containers, such as terracotta pots, or large plastic urns, and fill with your sterilized potting soil.

Pack it down quite tightly, and insert the thick ends of the canes evenly around the outside of the pot.

Loosely tie the tops together with an elastic band, or tie with a piece of wire. This is a temporary way to hold them steady while you start weaving the lower part.  Put the ends of the canes into a large heavy pot, and hold them in place with a soccer ball or other ball.

Warning: if you're using Salix twigs they will grow roots and choke out your vines, so peel the bark off the lower 20cm (8") of the stem to prevent this, or let them dry out entirely. 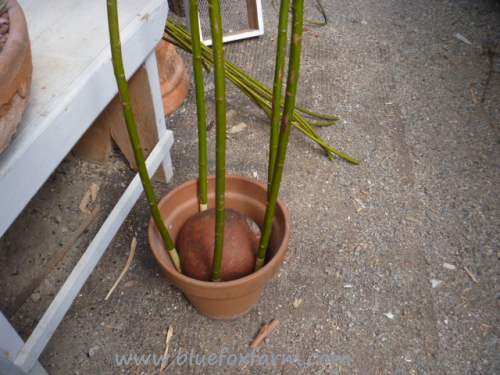 I sometimes pre-bend all the uprights, as shown in the upper picture.

Using a long piece of clematis vine, grapevine or long slender and flexible twig, start weaving by going behind one upright cane, and in front of the next, all the way around. You can either spiral the weavers as in the picture, or do it more tightly to give more stability.

You’ll see if you’ve used an odd number of canes that you can continue, and this time go behind ones that you went in front of before.

Do this several times, and each time will add more strength.

Pack down the weaving as you go, and once you have three to four circuits completed, simply weave the end into the previous layer to hold it.

Now wind some twigs or grapevines spiral wise up the canes. This will give your annual vines something to cling to.

Take the top of the canes apart, and re-do it so that the sides of the obelisk bulge out a little, instead of being straight up and down, then wire it firmly by winding the wire around then make a pig tail of the two ends.

Add a fun finial - a glass globe salvaged from an old light fixture; 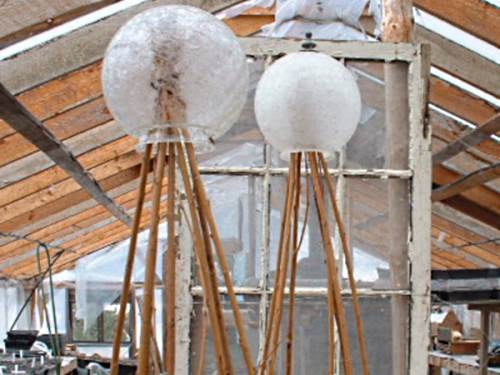 Plant the seeds of Ipomoea, Canary Bird Vine, Sweet Peas or Pea Vine or any other annual vine, and leave in place to germinate or place in a warm greenhouse.

Once the seedlings emerge, gently start to train them to climb up the obelisk, and in a few weeks they will be gleefully reaching for the sun.

Wind them the same way the tendrils automatically start to go, or it will be a constant battle and a rats nest.  You'll need to do this every day at first, but eventually they'll start to do it themselves.

A rustic twig obelisk covered in the bright flowering vines is a sight to behold.