Choosing the Most Suitable Species from Local Trees

The best twigs for crafts are those that are easily replenished by the shrub or tree so it can be harvested every year or two. 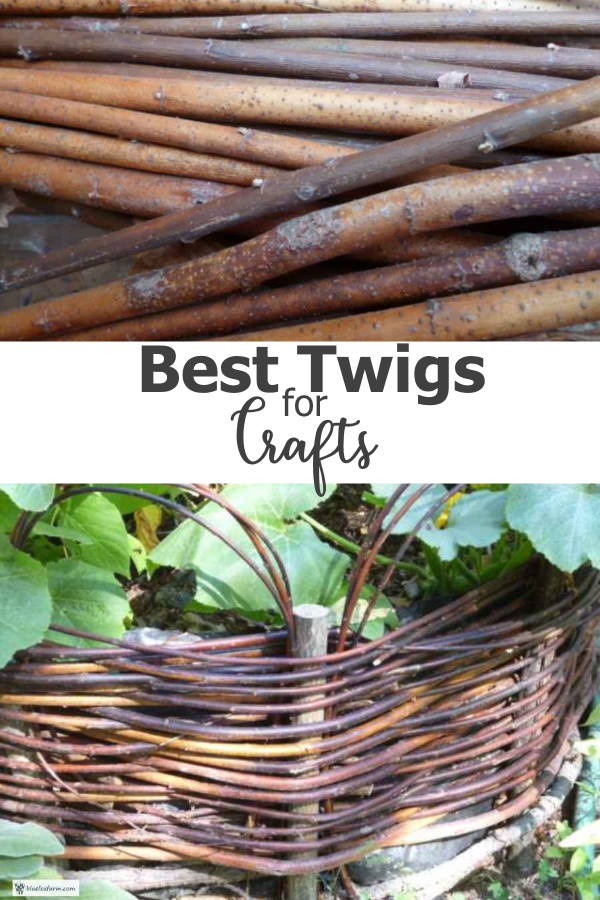 Finding the best twigs means looking at the shrubs in the early spring, as that’s when the colour is best, and it’s easier to see how long and straight they are before the buds break.

They are also easier to work with before they leaf out in the spring, so harvesting can take place anytime during the winter into early spring.

There are also less insects or spiders to crawl down your neck.

Once the sap starts to rise there is more risk of ‘barking’ the branches and stems, leaving bruises; therefore, the earlier the better.

However, if you want to peel the canes, then by all means harvest the twigs as the sap is rising – the bark will peel off easily at that time. Use the bark to make bark bows to decorate wreaths and other items.

Have a bucket of 10% bleach solution to rinse the canes off with or a black mold will grow on them disfiguring the finished craft.

It’s also a messy business using the stems with leaves on, as you have to pluck them off one by one, or run the risk of them rotting and turning into a slimy black mess.

The older branches and thicker stems can be harvested later, as they seldom have any leaves on so are easy to work with.

Growing some of these shrubs and small trees in a shelterbelt or windbreak can give you the opportunity to put a management plan in action to enhance growth and enable you to harvest the best twigs for crafts in the right stage of growth.

Many of the old time artisans used hedgerow twigs for their crafts, and managed the poplar and willow trees along rivers edge by pollarding, or cutting the new growth right back to a stump every year.

You can see this technique in old paintings of Holland; this was an important benefit for the crafting community.

Coppicing has also been used for centuries in Europe, especially in Britain to provide many strong new canes for crafts.

A resurgence of interest in basket making and other hand made crafts has also resulted in a renewed fascination with willows in general, and new varieties suitable for crafts.

Living tunnels, mazes and gazebos made with the canes of the willows stuck directly in place to root and grow and be subsequently trained into a thick hedge are a craze that shows no signs of going away.

Statues made of Salix twigs and other many other types of twigs are amazingly creative ways to use some of these best twigs for crafts. Twig garden statues can be a herd of deer, people or other figures, or an abstract. Teepees and wigwams covered in bean plants can be a fabulous hide away for kids.

The Best Twigs for Country Crafts:

Best for all round versatility, colour and flexibility, Salix twigs are a hands down favorite. Used for baskets, wreaths, fences and many more crafts.

Amelanchier twigs are used for crafts with a lifetime of use and abuse – fine grained wood with a soft luster, the Saskatoon berry is renowned for its strength and hardness.

I use Amelanchier, or Saskatoon for twig walking sticks or buttons. The fine grain makes a strong wood for hard wearing crafts.

Fruit wood twigs such as apple, cherry or plum wood salvaged from annual pruning cycle in orchards can be a fantastic supply of very fine grained wood for carving, if it’s big enough. Make fruit wood tool handles for chisels or garden tools.

I also use this wood for twig walking sticks as it's hard and fine grained, and comfortable in the hand. They can be made with the medium sized wood and the smaller wood such as water sprouts will make incredible bird cages.

For any craft that requires a flexible twig, such as wreaths, hands down, willow is my favorite.

This rounds out the potential uses for all the best twigs for crafts.

Some species of common trees are just not suitable for twig crafts, including the lovely and graceful Betula or birch tree.

If the pieces aren’t peeled of the bark they tend to simply disintegrate into dust over a very short time. However, the bark has been prized for use in many bark crafts.

Other species to avoid are Populas nigra and Populus tremuloides, which have the same issue.

Oddly enough, in pioneer times, water troughs and other watertight containers such as buckets were made from poplar; if it’s kept continually wet, it doesn’t rot. Treenware was commonly made out of poplar for kitchen use.

This wood is also cut into lumber and used as pig pen flooring laid right on the existing ground, and for decks on low bed trucks used for transporting heavy machinery. The advantage to using it for this is that it doesn’t form any splinters, so won’t puncture tires on the machines and tractors.

Another species of twigs to avoid is the Alnus, or alder for similar reasons to the birch. Weak, punky wood which won’t last and quickly rots – I have used this on occasion and found that peeling the bark off first will keep it sound longer.